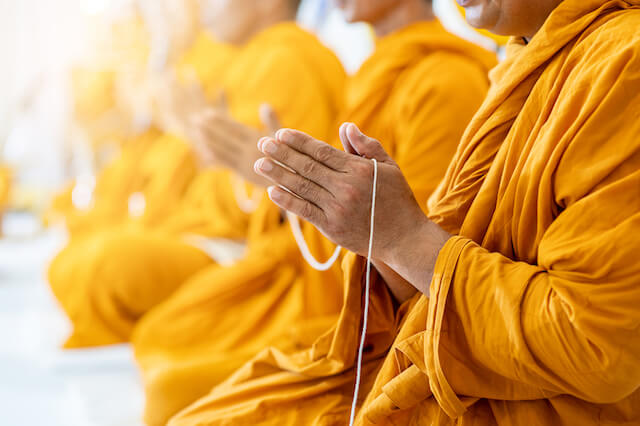 Approximately 1/3 of the population in Singapore practices Buddhism. Aside from incorporating the religious beliefs and practices in their daily lives, this also extends to funeral services when a Buddhist person passes away. There are specific funeral rites and traditions in a Buddhist funeral – and knowing them will help you have a better approach in dealing with funeral arrangements or pay your respects to the deceased in the right manner.

Read on as we explore more about the customs of a Buddhist funeral.

What do Buddhists believe in

Buddhists believe in the reincarnation of the soul that takes place after death. That means death signifies the beginning of a new round of rebirth. This belief in reincarnation forms the underpinnings of most traditions in Buddhist funerals.

As such, Buddhist funeral rites are conducted to smoothen the transition of the deceased into the next life, which are led by monks. Performing funeral activities and having a proper funeral send-off does not only display the final act of love and filial piety – it also offers a peaceful closure to the bereaved family and aids the deceased in their afterlife journey.

Buddhist funeral rites can vary from family to family, but generally, a funeral wake is held for the deceased person in the family home, funeral home or a monastery depending on the family’s needs. During this time, mourners pay their respects to the deceased and express their condolences to the family.

The deceased’s body should be dressed in everyday clothes, instead of a fancy ensemble or with jewellery, and lie in a casket that is typically opened for viewing. A portrait of the deceased person will also be likely placed near the casket, which serves as the centerpiece of the altar that is set up by the family for the wake. The altar may also include an image of Buddha, incense, candles, flowers and fruits. Monks will deliver sermons and lead the chanting of contemplative verses to emphasize refuge and observance.

After the wake, the casket is sealed and lifted into the hearse or transportation vehicle. Family members and mourners will follow behind the vehicle in a procession, as the last opportunity to do service to the deceased.

If you are attending the wake or funeral, there are things you should know that may be helpful to show respect for the deceased and honour the religious customs of the family. The dress code involves plain clothing in white or light, muted colours. When approaching the casket, stand in front of the altar where you can bow or pause reverently for a moment of silence to express condolences and pay your respects.

Prayers and meditation may take place, and mourners should join in the chanting or sit silently. In general, all present should stand when the monks stand, and no one in the space should be sitting higher than the monks.

Buddhists can either be buried or cremated, and the choice is a personal one. For cremations, it can be done before the funeral service or after. If it occurs before the service, the urn will be placed in the room with the altar nearby during the wake. For the latter, the cremated remains can be scattered at sea, enshrined in a columbarium or kept by the family in an urn at home.

If a burial is chosen, monks may be present at the gravesite to lead chanting. Family members and mourners present should reflect on the temporary nature of life. The casket will then be placed into the grave.

Funeral directors in Singapore are knowledgeable in the area of funeral planning that involves various local religious customs and traditions. They can offer guidance and arrange the best way to send off your loved one.