Funerals are always difficult times for a family or friend in mourning. During these hard times, it is always thoughtful to send flowers as a sign of support to cheer them up and to let them know that you’re thinking about them.

Choosing the best sympathy flowers, however, can be rather challenging especially if you are unsure of the religious customs and rites, cultural beliefs, and floral etiquette. Hence, we’ve compiled a helpful guide to the best funeral flowers and floral arrangements for all types of funerals. 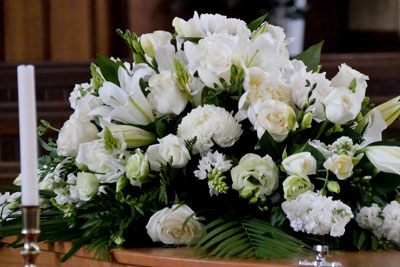 As a sign of sympathy, guests usually send condolences flowers and enclose money in white envelopes for the family of the deceased. Some common funeral flower arrangements for Buddhist funerals include wreaths or stands with white or yellow lilies, lotuses and chrysanthemums. These are the best flowers for Buddhist funerals as they denote purity, freedom, and peace, respectively.

The best time to present the funeral flowers to the family of the deceased is during the wake. Guests are also advised to come in monochromatic colours as a sign of respect to the deceased.

Christian funerals involve preaching by a minister, prayer and singing of hymns.

General flower etiquette to express your condolences for a deceased Christian includes gifting floral arrangements with Chrysanthemums, Carnations, Roses, and Daisies of white and red colours. For Christians, white flowers signify peace and purity whereas deep red roses denote grief and true love. These flowers can be gifted in the form of a flower stand or cross wreath to represent the Christian faith.

Funeral flowers are typically sent during the wake, before the actual cremation or burial.

Even if the deceased was not religious, flowers are still a thoughtful gesture to express concern and sympathy. Comfort the mourning family with simple white table sprays and flower stands. Daisy floral wreaths are safe and appropriate choices to honour a deceased even if he did not subscribe to any religion.

You could gift your sympathy flowers during the memorial service before the body is cremated or buried.

Catholic funerals include Prayer Vigil, funeral Mass led by a priest, and scripture readings by members of the family.

One option includes white Lilies in the form of bouquets, or heart or cross-shaped wreaths. Otherwise, you could opt for wreaths with small figurines of Mother Mary and pink carnations. To Catholics, pink carnations are sacred as they were created from Virgin Mary’s tears. Pink carnations also signify remembrance to commemorate the loss of a loved one.

Be sure to send your condolences flowers before the burial or cremation.

Soka funerals involve chanting by Soka members for the deceased to obtain enlightenment and extinguish negative karma. Chanting are led by a Soka Gakkai leader. Candles are lit, and offerings are made to the deceased. Like other funerals, Soka funerals use mainly white ornaments. Hence, stick to flower stands white daisies and peonies.

Generally, the best time to gift flowers is during the wake itself to show sympathy and care for the family of the deceased.

Like other religious funerals, white and yellow table sprays and flower stands with chrysanthemums and lilies are safe choices for a Taoist funeral. Avoid bouquets that are too colourful and extravagant.

Usually, sympathy flowers are gifted during the wake.