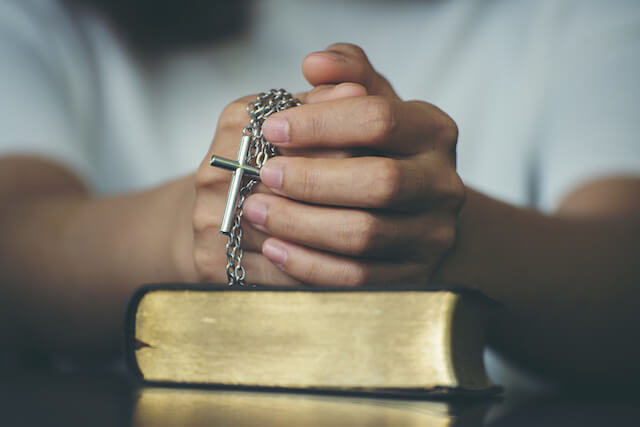 Christians believe in the afterlife – they hold firm to the faith that death marks the end of a person’s life here on earth but it is also a doorway to a better place. Family and friends are always assured of the knowledge that their loved one is resting in peace, according to what the Bible says regarding life after death.

Funeral practices may vary depending on denomination. However, Christians, in general, share the common belief in salvation through God. The order of service may slightly differ among different Churches and traditions of the family, thus funeral arrangements are usually discussed with the pastor and funeral director.

Nonetheless, the setup, mood and setting of the funeral service is largely the same – one which exude hope, joy and comfort.

What you can expect

Generally, the duration of a Christian funeral service will last for an hour. Some can also last for days, which depends on the customs and personal beliefs of the deceased and bereaved family members. Led by a minister or pastor, the service will open with prayer, readings and a sermon.

There will be readings from the Holy Book, which serves to be comforting and at the same time, to remind the bereaved of promises of a better new life after death. Loved ones will give tributes, eulogies and remembrances to reflect on the deceased’s life on Earth. Attendees may sing along to hymns, believed to further uplift the spirit of the bereaved. Then, the minister will provide some closing words to officially hand the soul over to God.

Before the funeral service, there may be an open casket viewing so attendees can take the opportunity to say goodbye to the deceased. When standing next to the coffin, one should bow their head slightly as a mark of respect and observe a moment of silence.

The dress code at a Christian funeral usually welcomes dull and dark colours such as grey, white, and black, while bright colours should be avoided. After the funeral, you can express a few words of sympathy to the family and offer brief statements of condolences.

The service may be followed by a burial, and loved ones will gather around the grave where a short prayer is said by the Minister. Otherwise, if cremation is chosen, a cremation urn may be placed without or in addition to the casket.